In other words, artists frequently sensitise us to contemporary goings-on, direct our attention to what is emergent and critical of the status quo, help us gauge the temperature of our immediate surrounds, and goad us to envision diverse social imaginaries. Whether or not we heed their messages is a measure of our own expediency or failings.

Many South African artists have taken such social responsibilities to heart. Count Victor Gordon among them.

What sort of person, for example, would set up a silk-screening operation on a university campus expressly to churn out anti-apartheid posters during the height of the liberation struggle in the 1980s? The answer is clear-cut: someone who is right thinking and open minded; someone who is driven less by fear than by conscience, more by compassion than racial rancour. And that’s exactly what Gordon did at the University of the Witwatersrand in Johannesburg, much to the chagrin of the government.
His activities did not remain below the radar: in a chilling episode a police commander summoned Gordon to his headquarters, where the man had methodically hung all the anti-establishment broadsides Gordon and his cohorts produced. “How are you, Victor?” the official creepily inquired. “We know what you little bastards are doing.”

Intimidation was as strategic a part of the apartheid-era police arsenal as was brute force; the SAP was as adept at dangling the Sword of Damocles over the heads of those it perceived to be “enemies of the state” as it was at administering hideous physical torture. To this day Gordon recalls feeling “an incredible combination of exhilaration and fear” from tweaking the smugness and superciliousness of the powers-that-be.

Many of Gordon’s instructors at the time retreated to an ivory tower seclusion. But he could not. To Gordon’s way of thinking it would be absurd and ethically questionable to concentrate exclusively on perfecting his technical skills while a civil war was raging right outside his college studio. 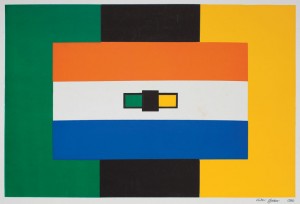 His notoriety was publicly certified when, in 1981, his screenprint ANC/SA/ANC (1980; see plate 3) was emblazoned on the front page of the Johannesburg Star. From the remove of several decades it seems to be simply a patterned series of hues, holding scant potential for controversy. But at that moment this work was cheeky to the point of being inflammatory.

The splendidly subversive conceit of this image was that in the dead centre of the republic’s flag Gordon replaced a trio of banners representing earlier configurations of the South African state with green, black and yellow blocks symbolic of the banned African National Congress. Furthermore, he embedded this ideological sleight-of-hand against additional broad swaths of the ANC’s colours. Gordon’s self-described “peculiar permutation” thereby situated the liberation movement foursquare within the heart of the nation—attacking the establishment from the inside—as well as surrounding it completely, denoting the exiled freedom fighters poised to strike from neighbouring countries. It was a stunning visual confirmation of officialdom’s twin fears of sabotage and invasion. 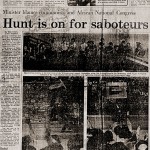 After years of advocating for politically active university students who were beaten, detained and disappeared, Gordon, like many of his fellow white South Africans, chose exile over national military service in 1987 (he had completed one tour of duty and was soon to be called up again). He joined his sister who was already living in Australia and he enrolled in graduate art studies.

Gordon’s M.A. exhibition was held three years later and revealed that no shrinkage of his political acuity or sense of social outrage had occurred due to his relocation. In A Transposed Landscape (1989; see plate 2) he depicted what few artists living in South Africa at the time would have dared to: a man lies dying in the street, blood oozing from his head and puddling down the pavement, a vertiginous, abject image that can barely be contained within the frame (after Manuel Alvarez Bravo’s 1934 photograph Striking Worker, Assassinated). His Detention without Trial (1988–89; see plate 167) presents a scene of two uniformed and armed men wrestling a smaller figure—a child perhaps?—into custody. Juxtaposed with this is a pair of eyes glaring out from a narrow slit within a black void. Do they belong to a prisoner, anxiously scanning his whereabouts? Or to a warder, scrutinising his captive? 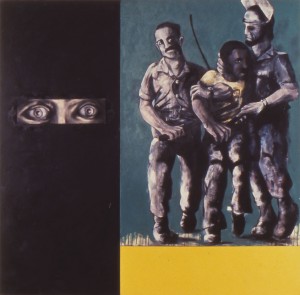 Detention without Trial 1988–1989 by Victor Gordon 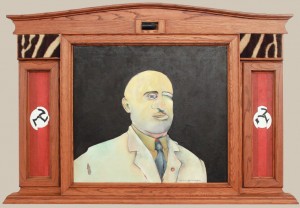 Moreover, some of his multi-media works incorporated actual fragments of Gordon’s own tumultuous history. Mnr Die Ware Jacob [colloquial for “The Genuine Article” (1990; see plate 180)], for example, features an elaborately constructed wooden frame topped by a classical pediment. It foregrounds the portrait of an eerie, officious-looking character with a cavity where his right eye should be, and bearing a snarling, distorted lip on the same side of his face. He exudes evil. Flanking panels bear a swastika-like insignia resembling that of the extreme rightwing Afrikaner Weerstandsbeweging [Afrikaner Resistance Movement]. And Gordon topped all this off by embedding a rubber bullet actually fired by the police that narrowly missed his head during a campus demonstration. In the painting

Boere Wapens 1652— “Boer Weapons” (1988–90; see plate 172) he affixed a sjambok, a leather whip used to beat demonstrators and detainees, and bolted down his mother’s Bible, representing the fact that religious teachings were perverted in support of a disgraceful government. These elements endowed the works with a tangibility and immediacy that concretise an irrefutable sense of travesty and menace.

It would be absurd to suggest that Gordon’s social endeavors and artistic practice brought a malevolent regime to its knees. However, the cumulative effect of his activities—multiplied many times over by those of like-minded creative activists—undeniably nourished an atmosphere of critical examination and resistance that swelled the ranks of those who were dissatisfied with South Africa’s political situation and steadily chipped away at the apartheid government’s increasingly fragile and fraying legitimacy.

Victor Gordon’s reputation is enjoying a second life in his home country: the artworks just described in detail are now in the collection of the Ifa Lethu Foundation, a project dedicated to repatriating art that was taken out of South Africa during those dark years of apartheid. Gordon is one of the only white South Africans whose work has been included, and it was featured in Ifa Lethu’s inaugural exhibition Home and Away: A Return to the South in 2010.

Even though Gordon physically removed himself from the turmoil in South Africa, his commitment to interrogating the troubles there did not diminish. Moreover, his iconoclastic devotion to slaying dragons—be they political despots, unjust and discriminatory policies, or art historical exemplars—continues to be nurtured in his adopted land.

Victor Gordon’s vision is provocative, disquieting, unyielding and savagely satirical. It is a formidable body of work that can change minds.

The provocative Victor Gordon: art on the edge

As Steven Dubin has so passionately and eloquently expressed in his Foreword, Victor Gordon—the artist whose political awakening during the traumatic period of South African apartheid was sustained through a powerful series of anti-apartheid art projects in exile/refuge in Australia—is an inveterate slayer of ideological dragons and a deeply committed, uncompromising and provocative advocate for individual freedoms and political justice, whose hard-edged art relentlessly challenges the viewer to engage.¹

Dubin refers to the second coming of Gordon’s reputation in South Africa, which is encapsulated in the repatriation, by the Ifu Lethu (‘Our Heritage’) Foundation, of some of his most potent political works. Although Gordon is little known in his adopted homeland, it is wonderful that the message and import of these works is being disseminated and publicly displayed throughout the world, courtesy of an international touring exhibition, curated by Carol Brown, of works drawn from the Ifu Lethu Foundation.²

As curator of the Orange Regional Gallery’s survey exhibition of Victor Gordon’s art, however, I have mixed feelings about all this. On one hand I rejoice in Victor’s deserved international acclaim, but on the other hand I only wish we could present all his works here.

Although we have been able to put together a significant number of important works for our survey, to alleviate our loss of touring works, as well as those held in public collections overseas, such as The Essential Arch Bull (1994; see plate 4)—which is held in the art collection of the Constitutional Court of South Africa—we have included in this publication as many images of these works as we can.

Gordon settled in Australia in 1987 and, as Dubin has pointed out, chose exile over a mandatory second tour of duty in the South African armed forces. It is important to know, however, that another principal reason for his emigration was that the sort of art he wanted to produce, art that exposed the violent and iniquitous machinations of the apartheid system, during the so-called Unrest, was regarded by the State as sedition and had been forbidden under Emergency Regulations. Therefore, he could not remain in South Africa and be the artist he needed to be.

Australia served Gordon well. In spite of having to drive taxis to survive, within three years of his arrival he was in a position to mount a powerful exhibition of his anti-apartheid art. When he could not find a mainstream commercial gallery to host the show, he wandered into the Waterside Workers Union Hall in Sydney and presented Union officials with his proposal for a show, which featured a full-scale stage set of a fascist political meeting. The officials discussed the proposal and, having appreciated Gordon’s uncompromisingly satirical approach, accepted it with a proviso: the Union would give the artist the liberty of its hall, but unfortunately it could not pay him to curate the exhibition. Bless them!

Behold the Lands where Satan reigns (1990; see plate 5) was duly installed, complete with stage lighting as well as Mnr Die Ware Jacob (1986–1990; see plate 180), an elaborate assemblage which is now touring with the Ifa Lethu exhibition. It encloses a central painting of an evil-looking apparatchik, which is flanked by red panels, each featuring the provocative trinacriform, black-on-white, swastika-like insignia of the ultra-right Afrikaner Resistance Movement.

Between 1987 and 1994, the year in which democratic elections were held in South Africa, heralding the end of the State-sponsored apartheid system, Gordon operated as a member of the Struggle in exile. Fresh in his mind was all the political subterfuge and violence that had been everywhere about him during his period as a liaison officer between students and security personnel in the administration of the University of the Witwatersrand. In Australia, between 1987 and 1990, Gordon realised he had a great opportunity to expose the mechanisms of power in the system of apartheid through an examination of its very edges and interstices.

As the activist artist, Leon Golub has put it: in order to “figure out aspects of power, you have to look at power at the peripheries”,³ for it is at the extreme manifestations of a system of power that its contradictions and hypocrisies become most apparent. This insight is fundamental to an understanding of all Gordon’s art. Not only does he represent issues in their extreme or polarised forms, he also takes his paint right to the edge. Thus the edges, borders and frames of his paintings are often as important as what is going on in the middle. …