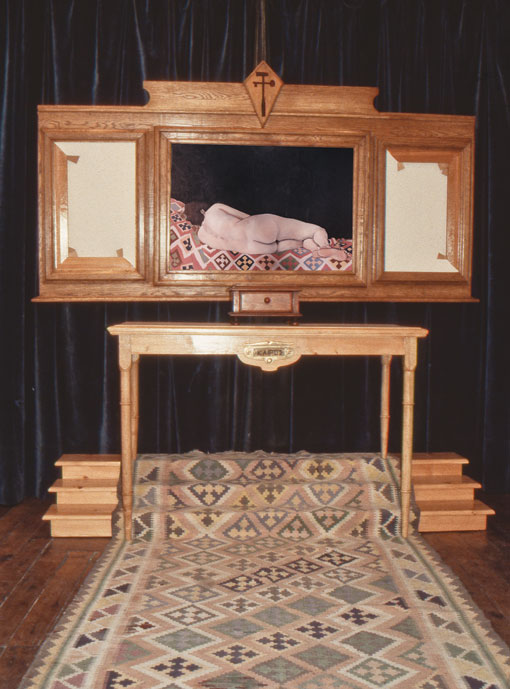 “O yes, detected in his very heart of home: his children’s father and their brother son and husband of his mother; bed rival to his father and assassin.”

At the core of the work in the single-drawer reliquary container on top of the (impractical) table, I located my mother’s caul. This was the actual amniotic membrane that had covered her head at birth, which had been surgically removed, dried out and retained back in 1916. It was thought to be a talisman, an apotropaion, which warded-off disaster, particularly against drowning. Additionally a child born with a caul was considered to be a seer. I had inherited the caul from my mother at her death. Scrutinising the snake skin-like caul it is not difficult to imagine it to be an enlarged dried-out foreskin. Eerie stuff man…

Utilising meaningful personal objects had become part of my iconographic process (I had earlier bolted my mother’s bible to a Zebra skin ). By using pertinent objects from my real world instead of only deploying mimetic devices, I was breaching the divide between the real and representation in my attempt to infuse a more profound sense of verisimilitude

All components of the installation were conceived to appear normal when, in fact, nothing was as it seemed to be. The rich-patterned fabric of the Afghan rug entices the viewer inwards and leads to a logically implausible staircase. The table with its turned legs of differing lengths is entirely dependent on the stairs to keep its equilibrium and is equally impracticable, while the stairs are equally not accessible. They ascend up and under ending abruptly at the back of the table.

The subject of the painting in the central panel is the mother of my daughter Hannah (during pregnancy) who had my mother’s name; Louise Gordon – no biological relation. My mother’s full name had been Louise Caroline (known as Carol) Gordon. My first wife Felicity Carol (known only as Carol) had adopted my surname and become Carol Gordon, so the names of both the mothers of my two daughters were identifiable with my mother’s. Was this merely serendipitous or had I indeed been subconsciously seeking-out successive nominal replacements?

In an archetypal Freudian manner my mother’s absence after her voluntary death, was a probable causal factor for me to metaphorically seek to replace her in my life. On a deep subliminal level was I also questioning my culpability (in a metaphorical sense) of having the desire to have serial incestuous conjugal relations with my mother? As Camille Paglia put it, “Reunion with the mother is a siren call haunting our imagination.”

Interestingly this very substitution would, on matured reflection, eventually provide me the opportunity of breaking those ties and thereby distancing myself from my mother’s power-hold over me. I would strive to sever the proverbial ‘Gordian’ (read Gordon) knot.

The installation’s timber elements, with the exception of the antique single-drawer container, were designed and fashioned by me from new raw-cut American Oak. The design was intentionally based on the hieratic power ‘em-bodied’ in 1st (French) Empire Neo-Classical period.

The traditionally painted reclining nude in the central panel of the tri-partite construction faces away from the viewer, displaying only her back view. The predominant and visibly protruding spinal column, prefigures later art work which delves into the sub-structure of the figure. While the image is intended to erotically entice the viewer in a traditional male-gaze voyeuristic manner, the unrevealing back-view is, in realty, a pose of rejection. She is painted lying on a bed covered by a patterned carpet, the same carpet which, in reality, leads to the stairs. By purposefully not fully-connecting the figure to the carpet via any logical shadow in the painting, the nude almost becomes a cut-out and takes on a floating ethereal quality. The actual carpet had been a shared treasured possession from my first marriage and held significance for me as such.

The actual (3D) carpet is continued or transubstantiated into painted (2D) illusion on the canvas – and that illusion is then suggestive of itself become reality. Is this not a classic case of “life imitates art far more than art imitates life.”

The construction has, at its apex, a cross formed by an iron hammer and key, similarly paired but functionally illogical and impracticable – yet symbolically loaded. This cruciform is housed in a custom-made coffin-like diamond shape. On the left (or sinister) end of the key, the action-end, is a small negative or voided inverted Petrine cross, nowadays associated with satanic worship; while on the right side handle of the key we find a negative cut-out eight – the symbol of harmony and balance. The key cannot unlock anything as it is impeded by the hammer, which also cannot be used. I dug the hammer up in my childhood garden and the key I discovered embedded in a mud brick while renovating the first house I owned in Johannesburg.

The two panels on either side of the central panel are a re-use of earlier iconography. Made of taut raw canvas pulled and twisted over stretchers, their surface structure and sub-structure are simultaneously visible and pose a visual conundrum. They are each intended to represent one of my two young daughters, their lives metaphorically yet-to-be-painted. 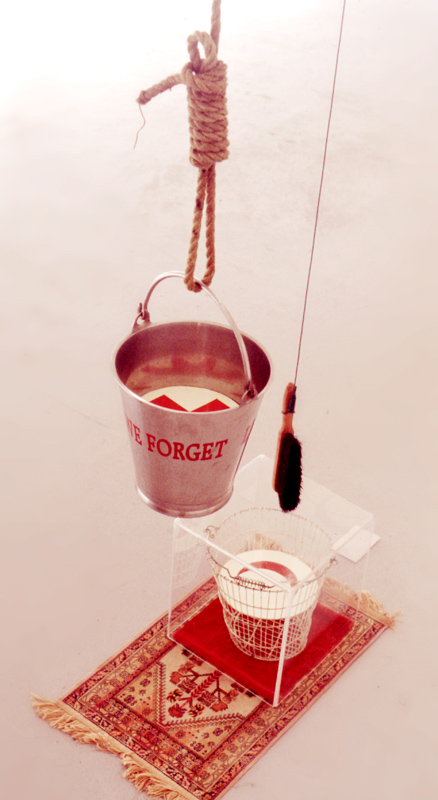 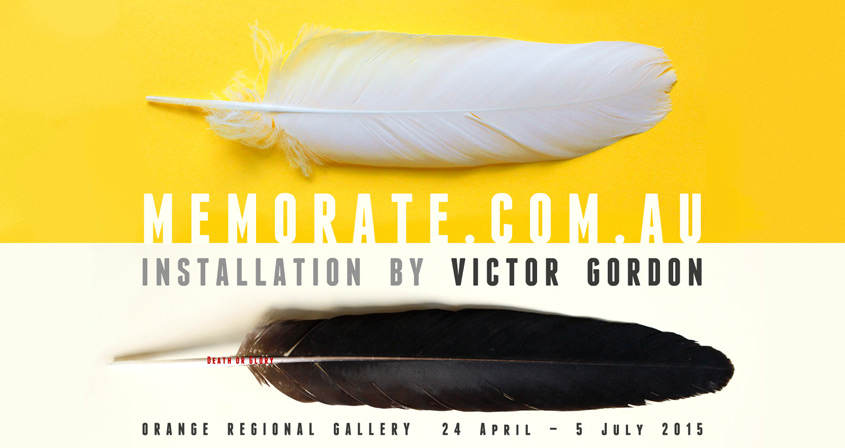