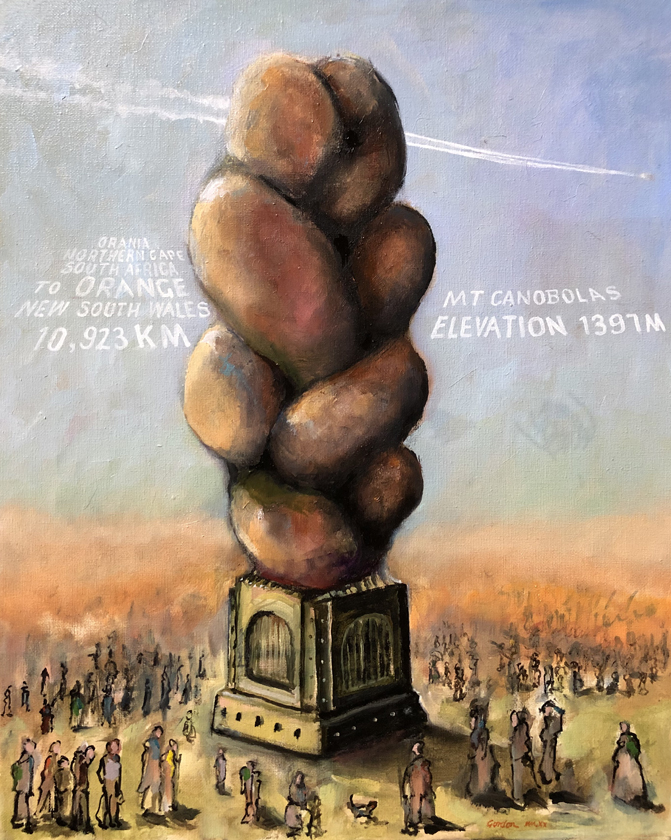 The artist lives in Orange. Orange in New South Wales is a typical country Town with high levels of inherent racism. Over seventeen years the artist has experienced and witnessed a deep-seated reciprocal racial animosity by the (predominantly) white residents and their minority indigenous counterparts. Although this is subcutaneous and generally not openly expressed, racism is a strong component of life in most rural towns in Australia.

Orange, like so many small towns across Australia strives to make its existence felt. Many country towns make claims to being of historic significance while others have created enlarged effigies of various fauna and flora that they claim have local relevance. Examples range from “The big Pineapple (Nambour QLD), “The big Sheep” Goulburn (NSW), “The big Guitar” (tamworth NSW), “The big Lobster” (Kinston SA)”, “The big Galah” (Kimba SA), The big Prawn” (Ballina NSW) etcetera. It is believed that there are as many as one hundred and fifty of these inflated iconic “cult” symbols countrywide.

So far Orange has not yielded to this cheap manoeuvre but not without fervent local attempts. One such offering from a local luminary was a “The big Hat” purporting to refer to Banjo Paterson. Although having been privately funded it was fortunately turned down in an unusually far-sighted local council decision.

Reflecting on the cultural paucity that prompts these idolatrously poor-taste ventures, I turned my attention to thinking-up an iconic sculpture that would not only offer my home town a ‘big’ something, but could concurrently create a meaningful link between Orange and a distant overseas desti[nation].

What I came up with was a conflation of two nostalgic cultural symbols from South Africa. In essence this will be known as The BIG Koeksuster. A koeksuster is a traditional South African plaited sickly-sweet donut, deep-fried in syrup, not unlike Indian Jalebi’s. It originated in Batavia and was originally brought to the Cape by Malay slaves. The koeksuster like the Afrikaans language itself, was appropriated by the white volk. My giant bronze-coloured Koeksuster would be mounted on a diminutive Voortrekker Monument[1]. The hallowed Voortrekker Monument forms the plinth and supports the much-loved koeksuster.

My proposed monument is intended to be erected atop Mount Canobolas, the extinct volcano dominating the environs of Orange, New South Wales. Travelling directly West, the peak of Mt Canobolas is the highest point between Australia and South Africa and is thus of some connective significance (particularly to the artist).

Little matter that it may be misinterpreted, the author suggests that Orange enter into a sister cities agreement with Orania in the Northern cape, South Africa. Orania is distinct in that all residents of that effective enclave of the old South Africa within the new non-racial post-Apartheid democratic South Africa, are proud Afrikaner whites. It boasts its own paper currency and has no resident blacks. This aspiration is an anachronistic anomaly which is good humouredly accommodated by the government in line with the new South African constitution.

– what a role model for Orange NSW.

A monument dedicated specifically to white settler bigotry may well be a world first.

[1] Dedicated monument to the achievements of the Great Trek in carving out an Afrikaner nation in Southern Africa. https://www.sahistory.org.za/pla…/voortrekker-memorial-sites 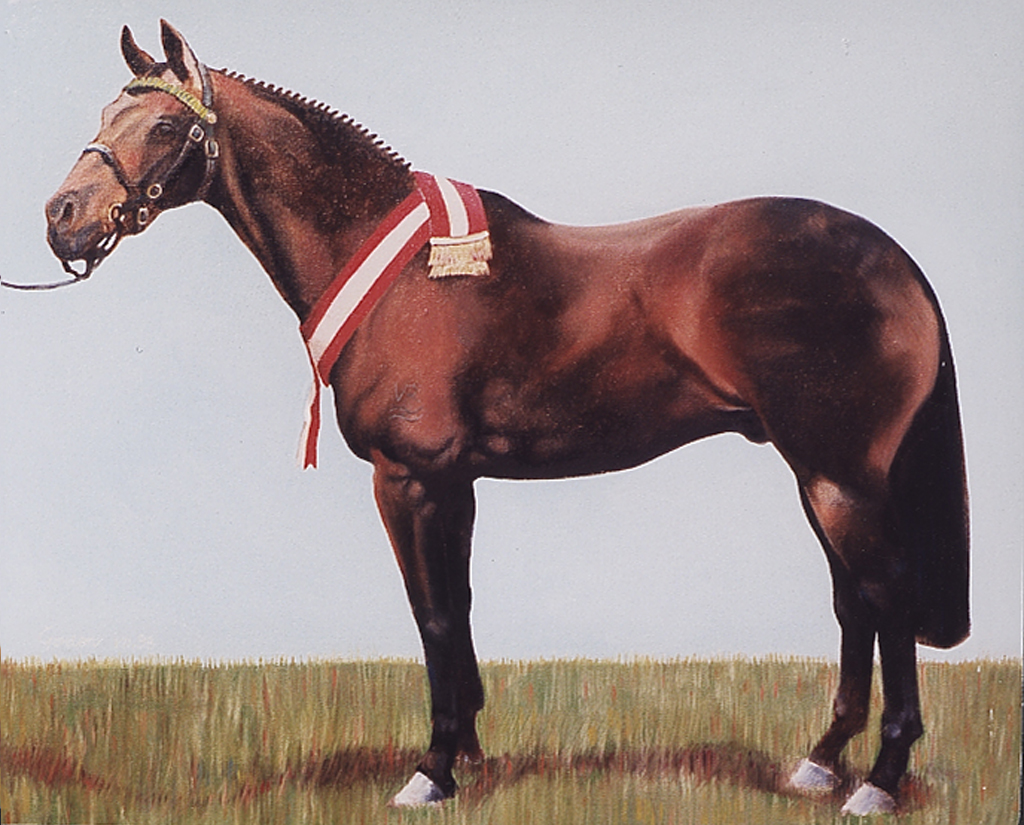 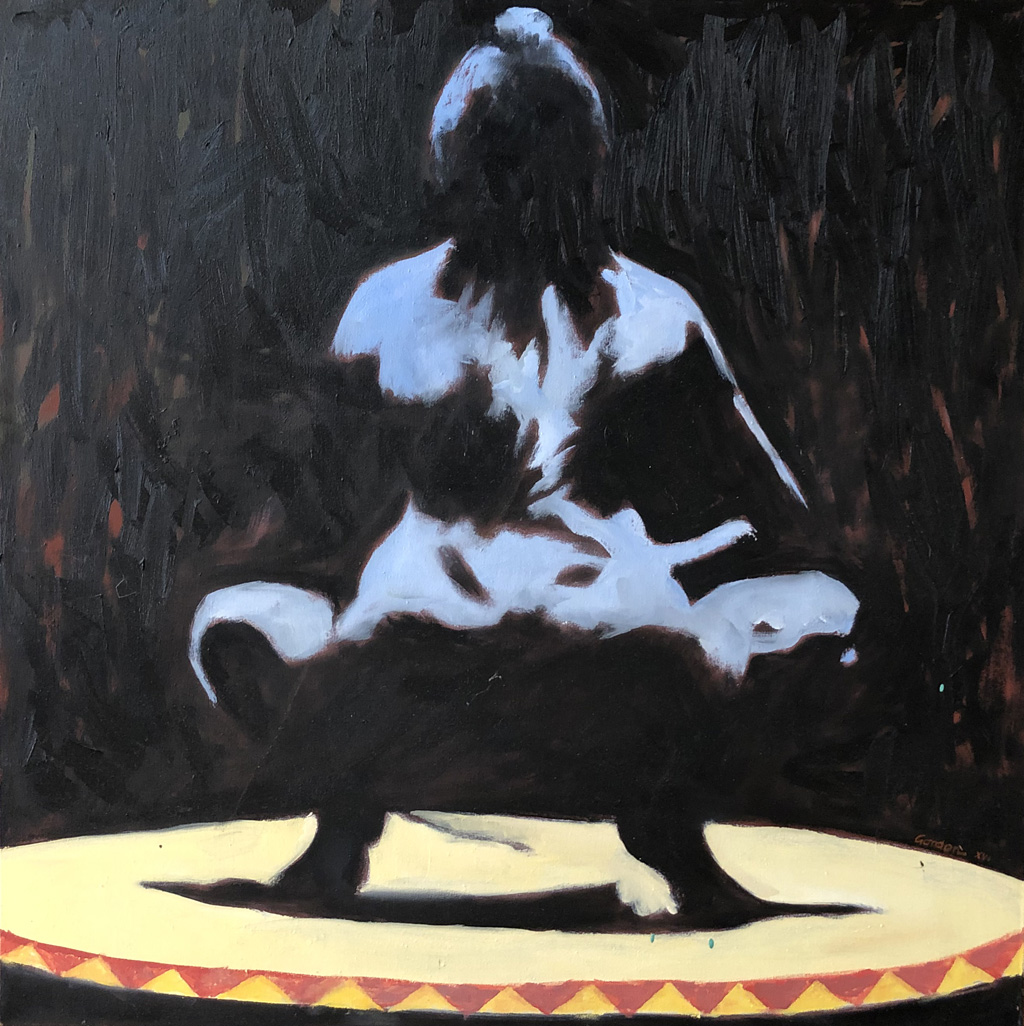 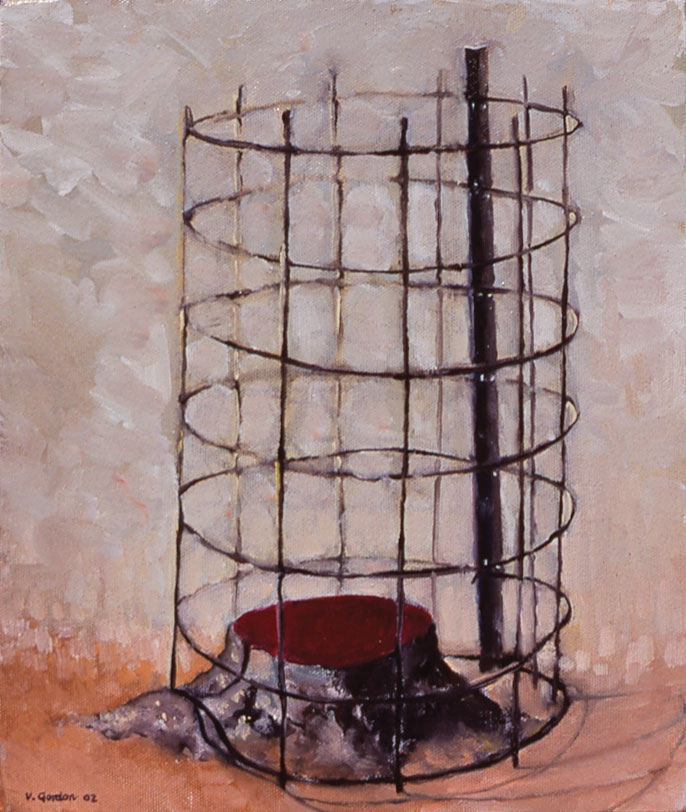